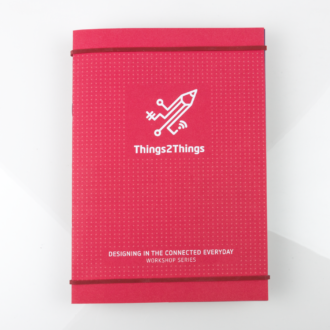 It contains a main booklet and four concertinas based on different themes. 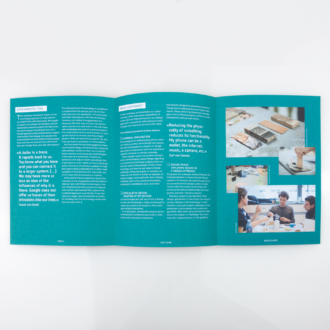 Following the same structure, each theme is explained with background, workshop and outcomes. 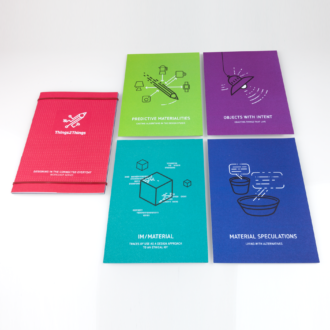 Showing all elements of the pack. Cover illustrations by Tal Amran.

Things2Things was a one-year research project with the 4TU Industrial Design programs – Design United (Netherlands). Their work focuses on a richer engagement between data and objects. With the Internet of Things gaining more popularity, their research was particularly concerned with the role of design thinking in creativity and innovation, working with both small and big data. We were asked to bring the results of this research together into a suitable book format, available for Dutch Design Week, for the study participants and for any future collaborators.

As part of the design process, we decided that a modular approach would mirror the research’s structure and offer the reader deeper, more purposeful insights. As such, we created one main booklet on the overarching theme of designing with data in the context of The Internet of Things, together with four smaller pieces on each of the areas of study. The book also included testimonials from designers, providing insights into how the themes related to their own work.

The four research booklets focused on different themes:
Im/Material
Using a tactile approach in their workshops, this research focused on the traces that users leave behind. The study asked participants to think about the bigger concept of designing with data in ethical ways.

Material Speculations
Researchers investigated the notion of living with everyday things, which are connected in a network and communicating with each other. The idea was to look at the Internet of Things from a thing’s perspective.

Predictive Materialities
Designers were introduced to the notion of working with data technology and algorithms as part of their studio practise. The workshops were intended to speculate about the impact of machine learning and technologies such as the Blockchain.

This piece examined our relationship with objects and their ability to display intentional behaviour and how they may influence people and situations were explored.

The project and booklet were presented at the Dutch Design Week 2016.